Gen Z and Millennials have grown up with mobile technology at their fingertips. Most don’t use landlines, or even cameras aside from the ones on their phones. Representing nearly half the population, and the bulk of consumer spending, major smartphone manufacturers are in a battle for their loyalty. In this report, we compare consumer demographics of Samsung smartphone and Apple iPhone users.

Flurry Analytics is used in over 1 million mobile applications, providing aggregated insights across more than 2 billion mobile devices per month. For this analysis, we look at the breakdown by gender and across four generations: Baby Boomers (55 years and older), Generation X (35 - 54 years old), Generation Y (aka Millennials, between 25 - 34 years old) and Generation Z (13 - 24 years old; note that Furry does not collect data for consumers under the age of 13).

Android is the leading mobile operating system with 72% global market share compared to 28% for iOS. In terms of handset manufacturers, Samsung is the global leader with 32% market share, followed by Apple with 28%. Even though Apple and Samsung make up the majority of the smartphone market, it is worth noting that 40% of the market is composed of other OEMs. In particular, Chinese manufacturers like Huawei and Xiaomi have shown growth over the last few years. Let’s start by comparing smartphone brand preferences by generation. 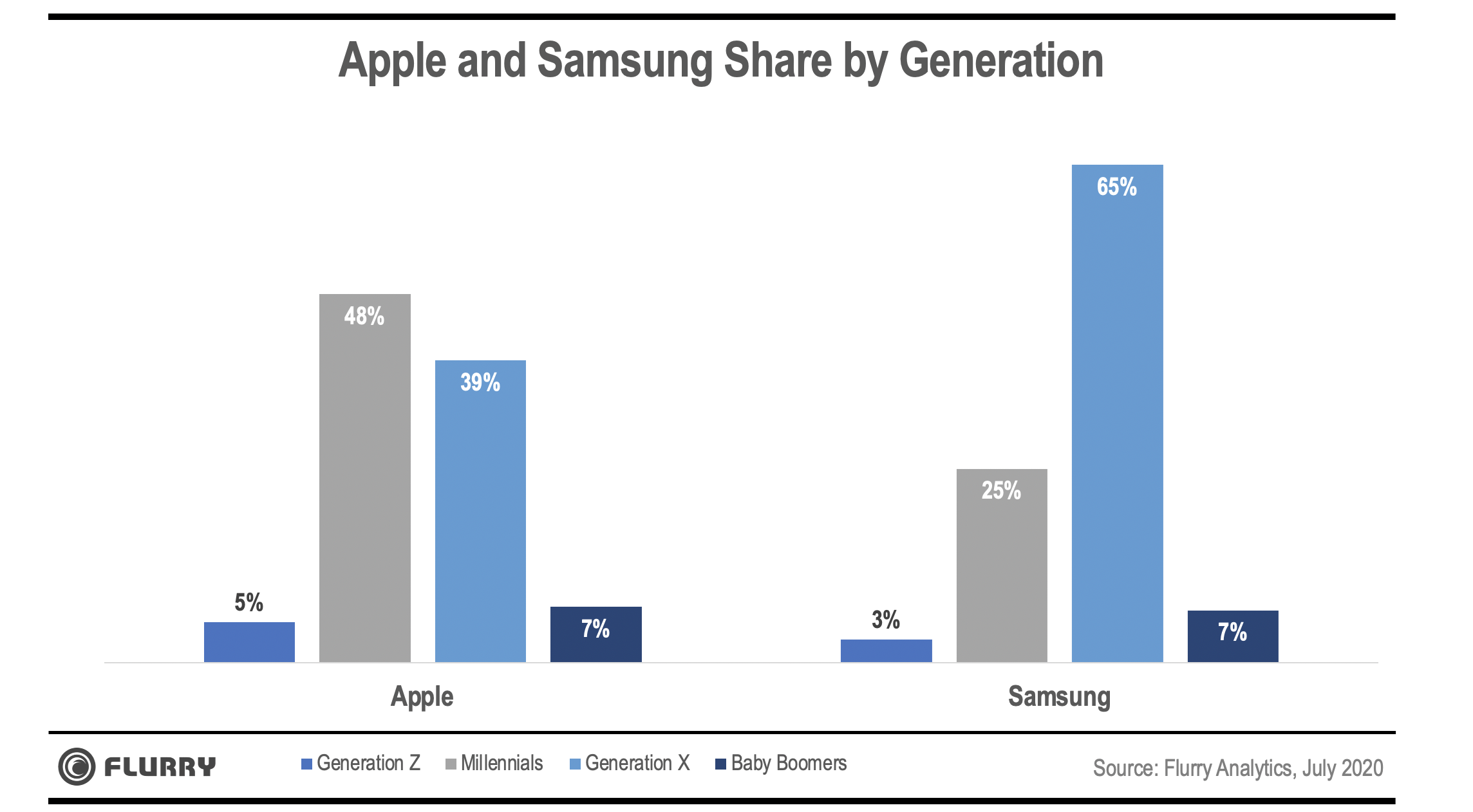 In the chart above, we show the distribution of users by generation for both Apple and Samsung. In both cases, Millennials and Generation X make up about 90% of each OEM’s user base. This stands to reason since those two generations span the ages of 25 to 55 years old, representing the majority of the global workforce. The key difference is that Apple mobile device users are younger on average. 53% of all Apple mobile users are under the age of 35, compared to only 28% for Samsung.

Generation Z also shows a strong preference for Apple, although they still make up a small percentage of the world’s total smartphone audience. 32% of all Gen Z smartphone users are on an iPhone, compared to only 21% on a Samsung device. That 11% point difference could mean a significant advantage for Apple as more of this younger group ages into smartphone ownership. Next, let’s look at smartphone brand preference by gender. 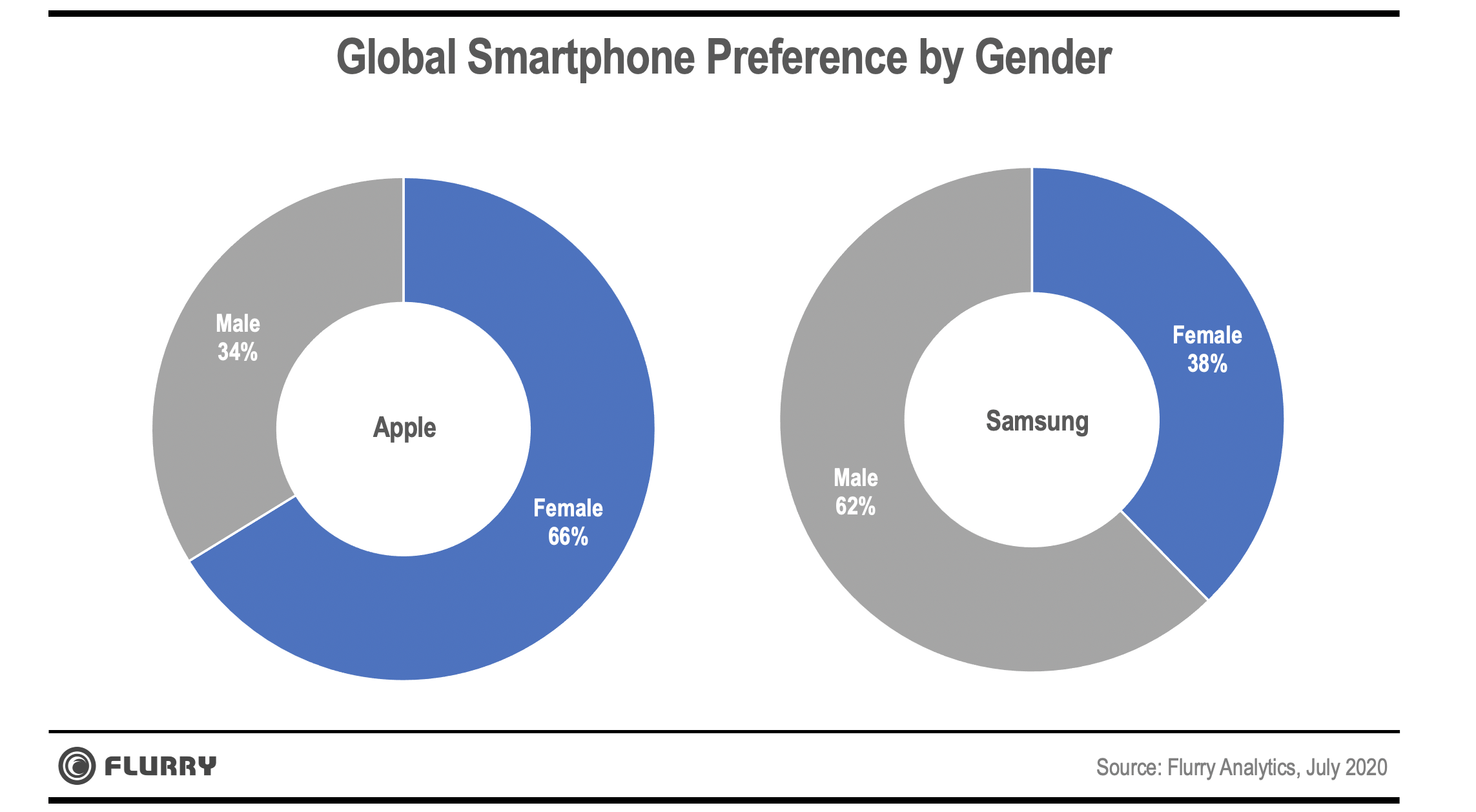 In the above side-by-side pie charts, we split Apple and Samsung audiences by gender. Globally, two-thirds of all Apple device owners are female. The figures are nearly reversed for Samsung, with men making up 62% of their mobile device audience. While not shown in a chart, we did break these audiences down by gender and generation. Doing so revealed that Apple appeals particularly well to Millennial and Gen Z females. In fact, over 4 times as many female Millennials use Apple versus Samsung devices. Within Generation Z, twice as many females use Apple over Samsung. There is a fair amount of speculation as to why younger females use Apple and older males use Samsung. Apple’s sleek design and intuitive user experience may appeal more to women, while the ability to heavily customize Android on Samsung could appeal more to men.

Our analysis shows that females and younger generations prefer Apple. If Apple can maintain the preference among younger users, we believe they will gain market share, particularly as the younger part of Gen Z begins to adopt smartphones. For Samsung, the big question is whether they can take share from the remaining 40% of the market. The Samsung Galaxy line does compete well with iPhones, but Samsung’s core strength is in the middle of the market, where they face increasing competition from less expensive Chinese devices. We’ll continue to monitor smartphone adoption trends and keep you updated. To never miss an update, make sure you follow us on Twitter and LinkedIn as well.

iPhone is a trademark of Apple Inc., registered in the U.S. and other countries.

Flurry’s blog (flurry.com/blog) is an independent blog and has not been authorized, sponsored, or otherwise approved by Apple Inc.